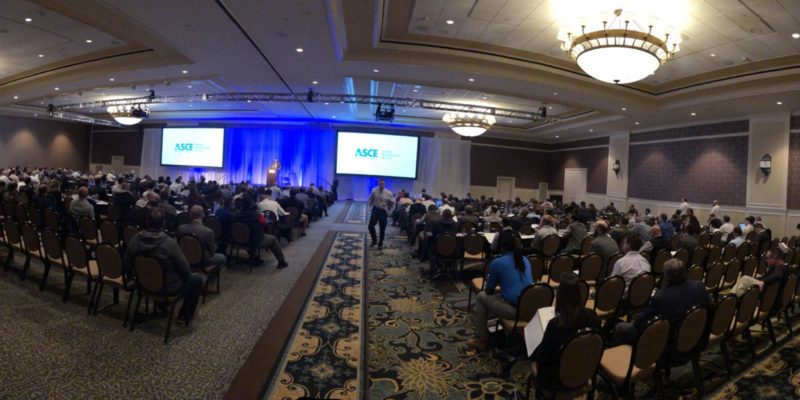 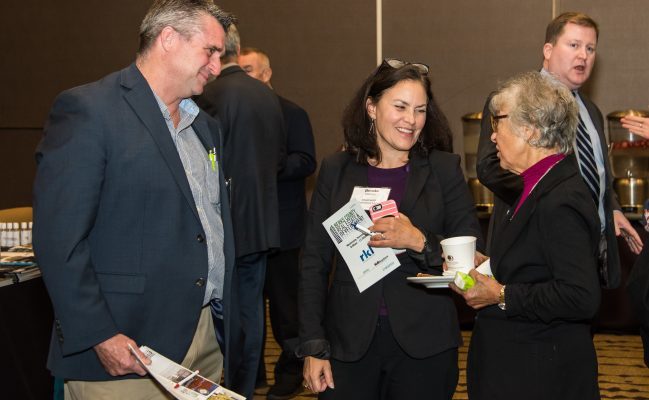 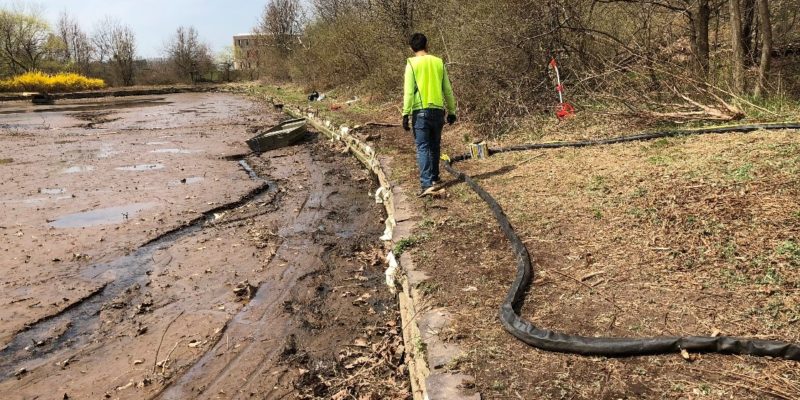 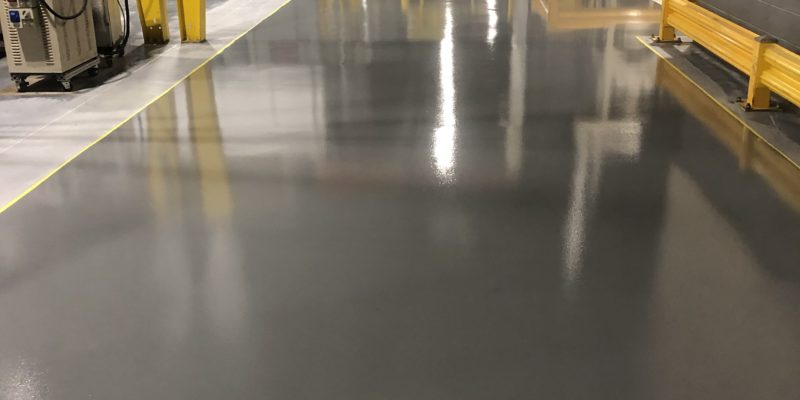 3,570 SF of oil saturated concrete had to be prepared and resurfaced. Control joints needed to be rebuilt. The flooring installation needed to have excellent light reflectivity and durability and be easy to clean. 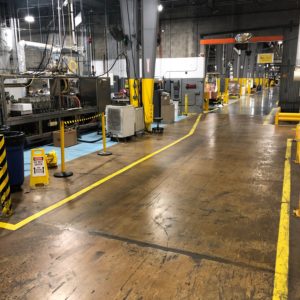 Hi-Tech set up 5’ perimeter plastic fence and used a heavy detergent scrub before shot blasting to ensure a deep clean of the contaminated concrete.  Using a specialized concrete shaver, a 4” wide by 1” deep channel was made in order to rebuild deteriorated control joints.  We then recut the joint at ¼” wide and filled with flexible joint filler for expansion.  The next step involved diamond grinding to remove soft concrete and hand grinding edges and rebuilt joints in order to smooth out the surface of the floor.  Hi-Tech then applied moisture tolerant primer coatings to guard against excess water vapor transmission.  Once this was cured, we applied a specialized 100% epoxy slurry at approximately 50 to 60 mils with high-strength industrial powders. (Compressive strength of this material is 13,000 psi.)  After curing of the high build flooring, we were able to mechanically sand the epoxy to create a profile for the final high performance urethane topcoat.  For this particular customer, the topcoat was in two specific gray colors and yellow border lines were applied. 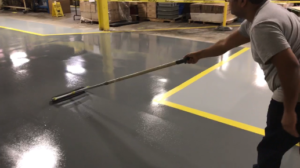 Results
The end result was a high performance, low maintenance product with excellent durability. Due to the specialized high solids urethane topcoat, the surface of the floor is now highly wearable and slip resistant. 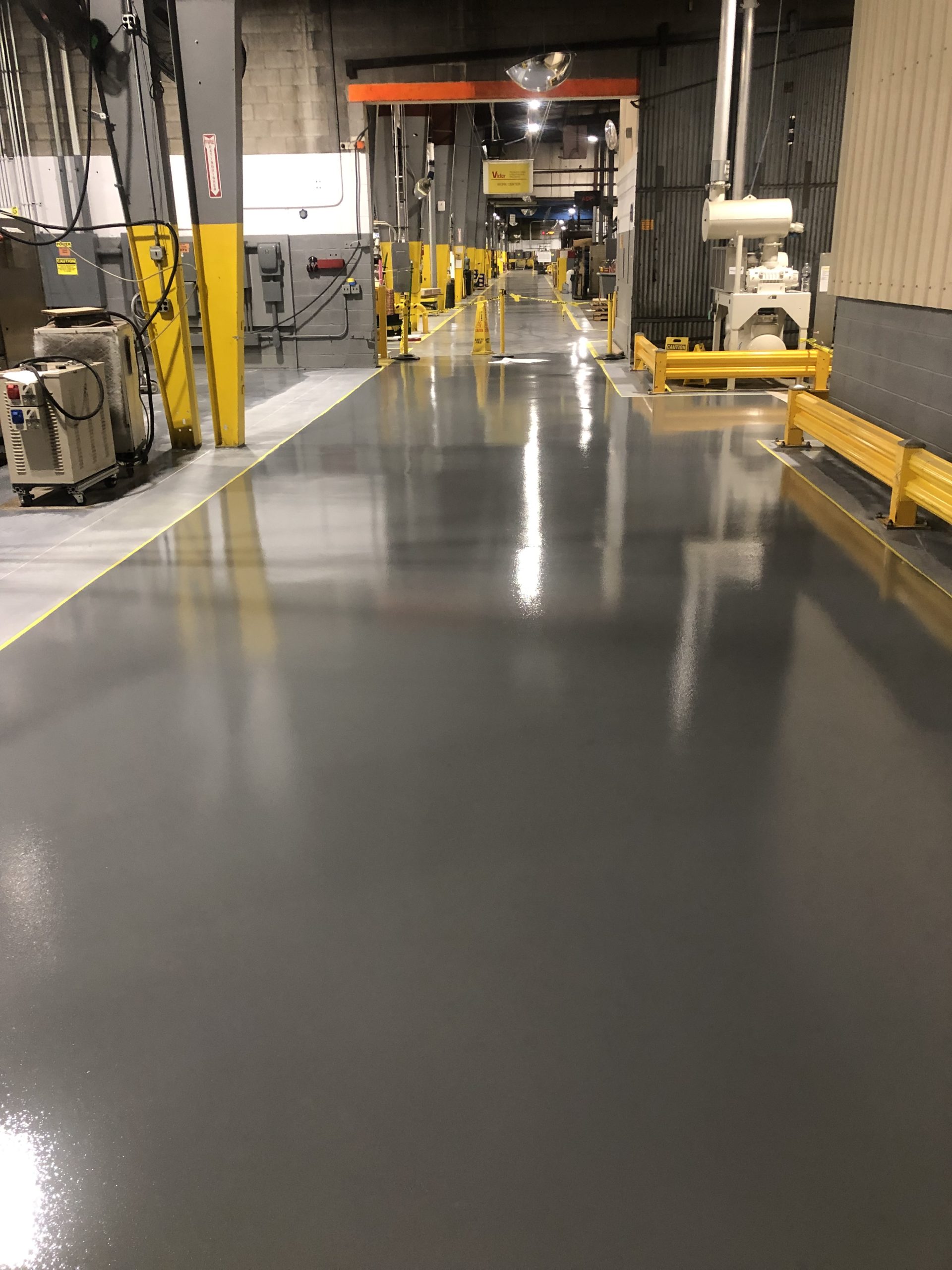 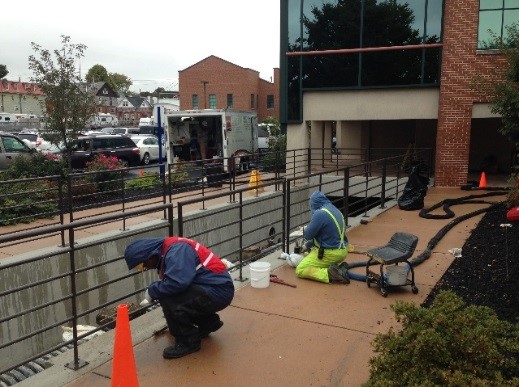 Non-invasive, low noise, reliable solution. Customer was able to have undisrupted meetings right above our workspace. 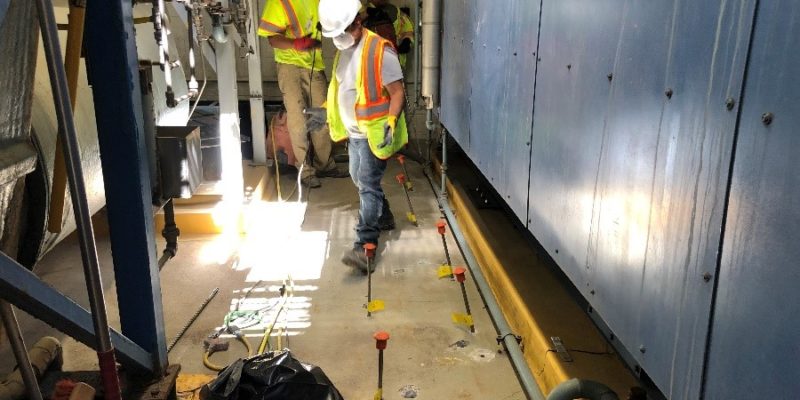 A 36’ x 12’ isolation concrete slab supporting a 100,000 lbs. boiler had experienced settlement. Cracks were observed in the slab wall, as well as beneath and around the base of the boiler inside the building. A previous stabilization effort, consisting of a low pressure grout injection, was conducted beneath portions of the boiler slab. The settlement, however, continued to the point where the boiler had to be shut down. The goal was to stabilize the boiler, but not lift the boiler.

After soils testing verified the weak soils, a plan was put in place to stabilize the weak soil zones with expanding structural polymer. The polymer was injected in various locations and depths under the footprint of the isolation slab. In various locations we encountered standing water in the soil. The polymer used was excellent for remediating the water and densifying the compromised soil in these saturated areas.

Our lasers read positive upward influence on the isolation pad as well as the surrounding concrete areas. A laser on the boiler indicated only a 1/32” lift, achieving the goal of stabilizing, but not lifting the boiler. No excavation, and minimal disruption to facility operations. 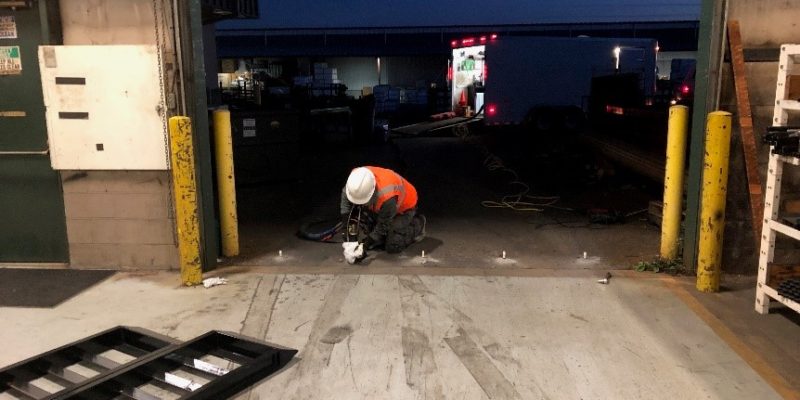 Asphalt paving settled below concrete level at ground-level 14-foot dock entrances. This resulted in damage to forklift wheels, pallets, and some loads. Upon exiting the building, forklifts drop from concrete floor to asphalt.

After soils testing verified the weak soils, a plan was put in place to stabilize the weak soil zones with expanding structural polymer. The polymer was injected in various locations and depths under the footprint of the isolation slab. In various locations we encountered standing water in the soil. The polymer used was excellent for remediating the water and densifying the compromised soil in these saturated areas.
Drill 5/8” holes at strategic locations for injection of expanding geopolymer. Within minutes, asphalt was stabilized and realigned to concrete floor level.
From set up to clean up, this process took approximately one hour per dock entrance to complete.